Rack banners and ZoCards were distributed amongst ZoCard’s 300+ venues, raising awareness of Redken’s products and availability. On-ground activation had 5 female talents giving out postcards and samples to passers-by in Orchard and the CBD during peak hours. Promotions were blasted via e-direct mail to a database of 18,000+ contacts. ZoCard’s website also had large side web banners linked to Redken Singapore’s Facebook.

The Smooth Lock campaign promoted both an in-salon treatment and accompanying product line, desiring that consumers not only visit associated salons, but also buy new products. Thus, the home-use line was accentuated: select rack banners at prominent venues, such as Dome at Paragon shopping mall and Harry’s Bar at the Esplanade, had Smooth Lock bottles slotted into the racks: but for the first time, the dispensers were actual product testers for consumer trial. Not only did the display increase consumer recognition, it also made the product easily accessible to the public in several locations at any point of time – ZoCard racks were perfect for this purpose due to its widespread presence and its un-invasive nature of advertising. 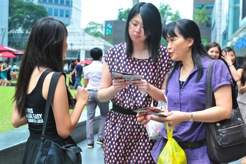 On-ground activation had talents educating the public on the entire process from salon to home, and pushing the use of packaged Smooth Lock samples. The activation went one step further with a competition: members of the public were to take a photo of themselves with a Redken girl and post it on Redken’s Facebook for a chance to win $300 worth of Smooth Lock products. This kept Redken current in consumers’ minds as they posted photos and awaited results, alerted their friends to the new line and built a sense of goodwill.

Public response was strong and the cards proved popular: the ZoCards had a 100% pick-up rate from racks, while the allocated 10,000 were all distributed during the on-ground activation.

The Redken campaign is the latest in the on-going advertising partnership that ZoCard has with L’Oreal.