Posted by Editor AL on March 5, 2014
Posted in: Uncategorized. Leave a comment 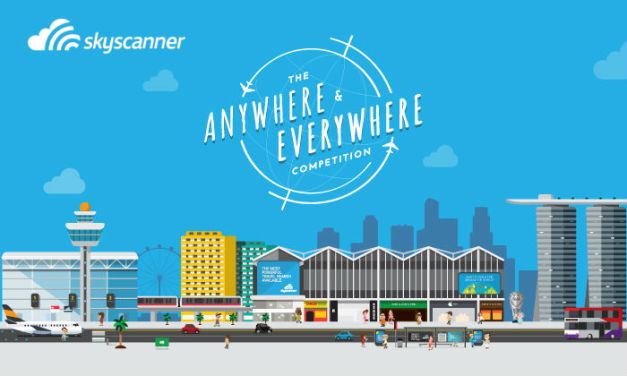 Following a competitive pitch, Skyscanner, a global travel search site, has appointed Leo Burnett Singapore, Havas Media and IN.FOM to launch its first ever integrated marketing campaign for the Singapore market. This marks the first time that Skyscanner has appointed creative, media and public relations agencies to manage its communications outreach programme in Asia Pacific. The integrated campaign, “Anywhere and Everywhere” is divided into two phases and will run from 15 Feb to the end of April.

The campaign recently kicked off with the launch of a microsite (goeverywhere.sg) and a call to action on 15 February for fans to send in video entries to participate in a competition that takes one lucky winner on a trip of a lifetime around the world – across six continents and seven unusual destinations. The final phase of the campaign will feature the winner as he/she starts his/her adventure around the world filmed by a camera crew. Fans will also be able to participate by taking their own ‘selfies’ – using a background picture representing the locations of the winner’s trip – which they can choose to share via their social media pages. Fans demonstrating the most creativity and the top 10 most liked ‘selfies’ will be entered into a draw to win a trip to the particular location.

Conceptualized and led by Leo Burnett Singapore, the campaign will run across digital, mobile advertising networks, social media and out-of-home media, including posters at 122 bus stops island-wide, double decker buses and giant outdoor digital screens. Social and digital channels will be used to drive the campaign, include Yahoo, YouTube, Facebook and Twitter. Taking the “Anywhere and Everywhere” campaign to the streets, activation teams will be deployed at special outdoor events at Orchard Cineleisure and Raffles Place to drive buzz and participation from the ground.